Last Thursday I began a series of theological reflections for our Thursday blogs. The Pro Deo Foundation’s mission is to create pathways for children and youth to flourish. Our strategy for accomplishing this mission is three-fold:

Each of these strategic foci has a theological antecedent that frames our work as a Christian organization: Trinity, Incarnation, and Cross.  Last week I wrote about the Trinity as our vision for our strategic partnerships. Today, I’d like to reflect on the Incarnation of God as our vision for local program initiatives.

The Gospel of John opens up with one of the most astonishing theological statements that had never been part of the imagination of humankind:

These were the most stunning words in all of history, theology, literature, and philosophy. The logic of God became an actual person. What the great philosophers have taken to be inscrutable fate, became tangible flesh. The great and mighty Yahweh, the One whom the children of Israel were warned they could not even set eyes on, came among us as a human being. The message of God became a man. That is, what mattered became matter. Meaning became material.

So the Christian faith is not fundamentally a theory or an ethic; it’s fundamentally about a person. The Word made flesh. And about a relationship between the logic of God and our haphazard logic. Between God’s faithful presence to us in Jesus, and our wavering fitfulness in response. Christianity is the story of that person in that relationship.

Maybe Eugene Peterson said it best in his translation of John 1:14, the Word became flesh and blood and moved into the neighborhood.

When the well-aged Bette Midler performed at the Oscar’s last week, I remembered that song from decades ago written by Judie Gold and covered by Midler, Nancy Griffith, and a bunch of Karaoke artists. The song gives a sentimental picture of what the world looks like from a distance.

As sweet as this sounds, it’s not even remotely true. God does not watch from a distance, like some benevolent grandfather, keeping half an eye on the children while reading the newspaper. God joins in. A God who is watching us from a distance is a God who we can keep at a distance. A God that takes human form is God that comes up close and personal. God is so close to us; we can never escape his grace.

As an organization, we want to function similarly. Philanthropy that sends money but never visits participates neither in relationships nor service and otherwise has no meaningful connection to the community is not philanthropy that is grounded in the Incarnation of God.

Our vision at Pro Deo is not only to send financial resources to others whether near or far, but also to do the work of serving the community in which we live. This community serving aspect is in part why we are an operating foundation so that we can run programs in our local community. I suppose we could pay others to run programs in say the South Pacific, but that idea does not flow out of our incarnational imagination as Christians. We are meant to be people who do not ignore that which is right in front of us. We are meant to be people who love our community, and not just in the same way we love pizza or a vacation in Puerta Vallarta. To love our community in the Christian sense means to die for it. We have a long way to go in that regard.

We also know that to do local programming well, we need time for our families to become embedded in a community before trying to address problems, whether “physical” or “spiritual.” Wise church planters do very little beyond living room Bible studies, serving in the soup kitchen, and building relationships in their first year of planting the church because they know that trust is built and clarity is gained over time in any community. We intend to launch programs in the fall that we pray will address opportunity gaps for youth. To do this well, we are spending our first year getting embedded in Carpinteria (and Santa Barbara by proxy). Friendships. Play. School. Church. Events. Neighbors. There is a lot to learn and to gain and to take in when moving into the neighborhood. I think, most of all, what is meant to grow in us is a sense of affection for Carpinteria and Santa Barbara. A burden for Carp that will require sacrifice. The point is that, for us, there is a call to the local even as we serve globally.

I remember a time when it seemed like every church was asking itself the question:

“If we left this location, would the community suffer by our departure, or would it simply continue as though nothing happened?”

This question is an Incarnational question for churches. And I think as a Christian foundation we share this vision of being Incarnational as a ministry team. We have literally moved into the neighborhood of Carpinteria with a deliberate intention of rolling up our sleeves and serving the community out of which we live and are raising our families. The good news is that we are not alone in this work, hoping to please a distant god. Ours is with us, closer than the air we breathe. 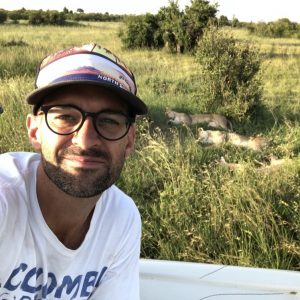 Chris Pritchett is the CEO of the Pro Deo Foundation. When he's not busy working, you can find him with his family enjoying the mountains or beaches of Santa Barbara.

We are a non-profit foundation creating pathways for children & youth to flourish. Located in #SantaBarbara

Things are happening very fast now for us. We will share the details with you all soon. It's been a crazy month or two and it doesn't look like it's going to stop anytime soon! #afterschool #nonprofit #youth

We've been pretty quiet lately, but not because we don't have anything going on. Quite the opposite. We are looking forward to sharing some important updates soon! #nonprofits #afterschool #youthentrepreneurs

The Pro Deo Foundation is a Christian non-profit, located in Santa Barabara whose mission is to help create pathways for children, youth and their families to flourish. Follow or friend us on the socials to stay updated with all that we have going on.